Tamaki Yurine ( Yurine Tamaki) is a character of the Luck & Logic anime. She is the Logicalist partner of Venus.

Holds a leadership position among the Logicalists. Takes a tough attitude towards Yoshichika. Can both study and exercise, and is a serious class president type. Contractor of "Goddess of Love and Beauty, Venus."

Tamaki has a slender figure and fair skin. She has black short neck-length hair with a pair of pink flower hairpins and four pink hair clips attached. She has pale blue eyes and wears black-rimmed glasses.

While in ALCA, she wears the standard ALCA uniform, but during training she wears a tracksuit with a white jacket hoodie, a cyan-linked skirt, a salmon pink T-shirt, black leggings, and red sneakers.

Tamaki is a hard-working and serious individual who is concerned with everything being done the right way. She dislikes Yoshichika for this reason at first, as he has a looser approach to his Logicalist duties and yet manages to upstage Tamaki seemingly through natural talent alone. However, Tamaki is merely self-conscious about appearances, and underneath that is someone who is also dedicated to protecting others, much like Yoshichika. Like Yoshichika, Tamaki holds life as precious and is hesitant to take a life even of a foe.

Tamaki is an above-average Logicalist, with a Trance time second only to Yoshchika's. Tamaki has been a Logicalist since she was 13, and became the youngest team leader in ALCA's history. While Tranced with Venus, Tamaki primarily heals allies, but can also attack enemies with a whip attached to her waist.

At the age of 13, Tamaki moved away from her parents to the city of Naien, as part of a gifted and talented education program. She initially intended to become a doctor to help those who were Paradox Sick, but her Logicalist powers awakened, and she was drafted into ALCA. During this time, her contractors were Xiaolin and Otohime, who she still remembers fondly. She quickly devoted herself to being a Logicalist, as she could also save lives as a Logicalist as she would have as a doctor, and eventually became the youngest team leader in ALCA history.

Tamaki is first seen fighting an enemy Foreigner with Chloe and Mana. She uses Venus's healing powers to heal Mana's wounds. Tamaki is then approached from behind from the giant dog monster, but Chloe finishes the monster off.

Later, when back at the ALCA base, she, along with Chloe and Mana, witness Yukari Nanahoshi being introduced to being a Logicalist by Veronica Ananko.

Tamaki, Chloe, and Mana then arrive to deal with Belial, the foreigner attacking the mall. The monster holds its own, but chooses to flee. Tamaki reports to Veronica through her Logigraph that the Foreigner got away, and then closes the gate, lifting the evacuation alert.

When Belial reappears, the three re-engage it. However, they are unable to defend against its heavy attacks, leaving them hiding behind a truck. As their trance limits run out, though, Yoshichika swoops in. He blocks the monster's heavy fire and sends a powerful blast at it, giving them the opening they need to finish the monster off.

Everyone releases their Trances, and Athena appears out of Trance. Tamaki and Chloe are surprised that Athena was the one who Tranced with their mysterious helper. They then oversee the Foreigner being captured and contained.

Later that night, Tamaki is present when Veronica discusses Yoshichika with the ALCA members. Yoshichika himself enters. As Tamaki introduces herself as the team leader, Yoshichika asks if he can simply go to bed, an act that puzzles and annoys Tamaki. 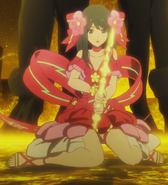 Tamaki in the Anime
Community content is available under CC-BY-SA unless otherwise noted.
Advertisement