Chloe Maxwell (クロエ・マクスウェル Kuroe Makusūeru) is a character of the Luck & Logic anime. She is the Logicalist partner of Valkyrie.

A blonde girl, whose charm point is her ribbon and ponytail. Has a sporty and bright personality, and is friendly to anyone. Covenanter of "Goddess of War, Valkyrie."

Chloe is a young girl with fair skin, blonde hair tied into a ponytail with a red bow, and turquoise blue eyes.

At ALCA, she wears the standard uniform, except with red stockings instead of the regular black. Her sports outfit consists of a tracksuit with a cyan-lined skirt, a green and yellow tank top, and a white hooded jacket tied around her waist. Her casual outfit consists of a green turtleneck dress with a blue-lined skirt, a red jacket tied around her waist, white leg warmers, and white and blue sneakers.

Chloe is a cheerful and boisterous girl who enjoys fighting Foreigners. Chloe has an independent streak, often taking matters into her own hands even to the point of not following orders or at the expense of teamwork. However, she is ultimately loyal to her friends.

While Tranced with Valkyrie, she uses a sword, and is able to use two swords at once.

When Chloe was a child, she wanted to be Logicalist when she grew up. So she worked hard and become a Logicalist.

A few years before this current time, Chloe was trapped in the Paradox Zone, which she was unable to free herself from. She witnessed a little girl (Tamaki) hardly beating a foreigner until that foreigner was destroyed. Tamaki was later sent to hospital due to injury. Later Chloe went to the hospital which Tamaki was sent to and introduced herself to Tamaki energetically. This caused one of the officers to shoo her away. Soon after her wish become reality, her logicalist abilities were awakened. She was later scouted by ALCA and she was introduced to Tamaki once again. Chloe then promises Tamaki that she will protect her.

Chloe is first seen fighting an enemy Foreigner with Tamaki and Mana. She jumps from a building to finish off the dog-like monster.

Later, when back at the ALCA base, she, along with Tamaki and Mana, notice Yukari Nanahoshi being introduced as being a Logicalist by Veronica Ananko. Chloe gets excited over the new girl, and as she presses her face on the glass to take a closer look, Veronica closes the windows with the press of a button.

Chloe, Tamaki, and Mana then arrive to deal with Belial, the monster attacking the mall. Chloe swoops towards the monster to attack it, but it blocks the attack. Belial holds its own, but chooses to escape.

When Belial reappears, the three re-engage it. However, they are unable to defend against its heavy attacks, leaving them hiding behind a truck. As their trance limits run out, though, Yoshichika swoops in. He blocks the monster's heavy fire and sends a powerful blast at it, giving Chloe the opening they need to finish the monster off.

Everyone releases their Trances, and Athena appears out of Trance. Tamaki and Chloe are surprised that Athena was the one who Tranced with their mysterious helper. They then oversee the Foreigner being captured and contained, and Chloe remarks that the mysterious young man that helped them knows his way around a fight.

Later that night, Chloe is present when Veronica discusses Yoshichika with the ALCA members, and when Yoshichika arrives.

She, Mana, and Yukari appeared in episode 5 of Hinalogic ~from Luck & Logic~, where the three of them appeared as obstacles in the Pillari Academy practical exam. She fights and successfully defeats Nina, and faces off against Yayoi, where she obliges Mana and Yukari not to interfere. This backfires, as Yayoi manages to sneak past Chloe with Liones's help without Mana or Yukari notifying her. 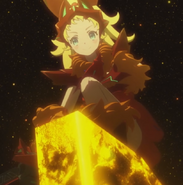 Chloe in the Anime
Community content is available under CC-BY-SA unless otherwise noted.
Advertisement