Belial (ベリアル Beriaru) is a character of the Luck & Logic anime. It is one of the demon gods invading Septpia.

Belial is, for the most part, an unintelligent beast. It can only speak in grunts, growls, and squeals, and is easily distracted by random objects. It is, however, intelligent enough to know when to escape a fight, and has enough of a personality to object to its containment.

Despite its lack of intelligence, however, Belial in Trance form is heavily armored and armed, and its body contains heavy guns and missiles. It has a relatively high Paradox Level of 7.2, and it was powerful enough to give Tamaki, Chloe, and Mana, three relatively experienced Logicalists, trouble.

Belial forcibly enters the city of Naien through a gate. It crashes through the ceiling of the mall where Yoshichika and his sister Shiori were shopping, and Yoshichika distracts the monster enough for the mallgoers to get away. Yoshichika is then pulled out of trouble by Athena just as Tamaki, Chloe, and Mana arrive to fight the monster. Belial holds its own, but it releases its trance and escapes. Tamaki proceeds to close the gate Belial went through.

Later in the day, Tamaki, Chloe, and Mana are fighting Belial and are having trouble withstanding its heavy fire. However, the recently-covenanted Yoshichika jumps in, blocks its attacks, and sends a powerful beam at it, allowing them to finish it off. Belial defuses from the human it trancejacked and is captured by an ALCA vehicle.

Inside the ALCA base, Olga Breakchild is seen talking to Belial periodically, offering it freedom in exchange for its cooperation for a mysterious end. Belial is unresponsive, although it is unclear whether it is because it cannot understand language or because it does not wish to cooperate with Olga. Meanwhile, the Logicalists fight a virtual copy of Belial for training.

Later, Yoshichika confronts Olga during one of his visits to Belial for his suspicious behavior, and Athena reveals that Olga has no covenanter and had been trying for the past two days to get Belial to covenant with him. Olga simply walks off without any shame or embarrassment. 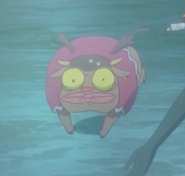 Belial in its default form
Community content is available under CC-BY-SA unless otherwise noted.
Advertisement