Athena (アテナ Atena) is a character of the Luck & Logic anime. She is the Foreigner partner of the main character Yoshichika Tsurugi.

A goddess of the parallel world Tetra-Heaven. She meets Yoshichika and is sent into a lifestyle of cohabitation. A kind-hearted woman who hates it when precious life is lost. Is filled with a sense of justice.

While in ALCA, she wears the standard Foreigner uniform. During training and free time, she wears a tracksuit with a white jacket, a cyan-lined white skirt, a blue tank top, purple pantyhose, and white sneakers.

Her casual clothes consist of a white dress and sandals. In episode 1, she wears a white hat with these clothes.

Her goddess outfit consists of a complex white dress with gold decorations, detached sleeves, white thigh-high socks, and a long skirt that leaves the legs uncovered.

Athena is a patient and kind woman who, like Yoshichika, is dedicated to protecting others. She is unusually dedicated to Yoshichika, even before meeting him, to the point of seeking out his long-gone Logic Card just so she could be with him.

From the beginning of the series, Athena was in love with Yoshichika due to earnest desire to protect everyone, a fact that she does not hide. While she is openly affectionate towards Yoshichika, she makes few advances on him as Yoshichika gets flustered when it comes to romance.

Athena came with the other goddesses to Septpia from Tetra-Heaven. She was a member of ALCA long before meeting Yoshichika, and was apparently the last of them to covenant with a logicalist.

Athena is first seen at a shore near a city, where she discovers Yoshichika's lost logic in the form of a Logic Card.

Athena is next seen when Yoshichika is attempting to distract a monster attacking the mall. Athena pulls him to safety, and they escape just as Tamaki, Chloe, and Mana arrive to fight off the invader.

At the evacuation site, Athena meets with Yoshichika again. Athena introduces herself, revealing that she already knows who Yoshichika is, and returns to him the Logic Card he lost long ago. Athena implores Yoshichika to fight with her to protect the world. Yoshichika agrees, despite the objections of his sister Shiori, and they depart.

While being transported to the location, Yoshichika asks Athena why she chose him. She reminds him of the incident two years ago, and that she chose him because, in her words, Yoshichika would never forsake a life, no matter what, even if it was a Foreigner. Yoshichika proposes that they covenant, and they do, initiating Trance.

Meanwhile, Tamaki, Chloe, and Mana are having a hard time fending off the Foreigner's attacks. As their trance limits run out, Yoshichika jumps in, blocks the monster's attacks, and sends a powerful blast at it. As the monster is disoriented, Chloe finishes the monster off.

Everyone releases their Trances, and Venus, Valkyrie, and Artemis appear out of Trance. The ALCA members recognize Athena, surprised that she was the one in Trance with Yoshichika. They then begin to ask Athena about Yoshichika.

Later, at the ALCA base, Athena discusses Yoshichika with Utsutsuno Jarno. The man is intrigued by the turn of events causing Athena to covenant with Yoshichika, and Athena replies that she's glad to have met Yoshichika.

That night, when Yoshichika enters his room, he finds Athena. Yoshichika is flustered over having to sleep in the same room as Athena, but Veronica simply reminds him that it is mandatory for Logicalists to live with their covenanters.

Athena meets Yoshichika for the first time when she pulls him to safety while he was trying to distract a monster attacking the mall. She meets Yoshichika again at the evacuation site and returns his missing Logic card, while imploring him to fight with her to protect the world. She admires Yoshichika because of his strong sense of justice , and his ideal to never forsake a life, even if it was a Foreigner. As the series progresses, she falls in love with him, though conflicted by the idea that she would have to return to Tetra-Heaven again once the War was over. Before the final battle against Lucifer, it is revealed that she and Yoshichika promised each other that if their Logic cards were scattered all over the world, the first one to find all of them would grant the other a wish. Eventually, they find each other's Logic cards, and Yoshichika wishes for them not to be so formal, while Athena wants to make Yoshichika whole again.

Athena in her goddess clothes 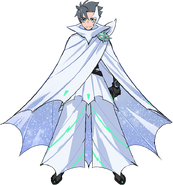